Games of Goddess Kyaa – In this first scene that Goddess Kyaa has prepared, She has Her slave River and slave Abigail tied up in a little challenge that will test their teamwork abilities. The two slaves could not contrast each other any more than they do with slave River in light pink from head to toe and towering almost a foot over slave Abigail who is in all black. Scattered on the floor is a variety of different sized weights and a box of pebbles. Goddess Kyaa has them cuff each others hands behind their backs and proceeds to tether them together using clover clamps on their tits and a piece of twine between them that hosts a singular hook. Their goal is to move as many weights as they can in 3 minutes, from the floor to the box of pebbles using only the hook. It proves to be harder than they both expected. After failing miserably, Goddess Kyaa has no other option but to punish them for being such losers. She obviously enjoyed herself though as I think you will too 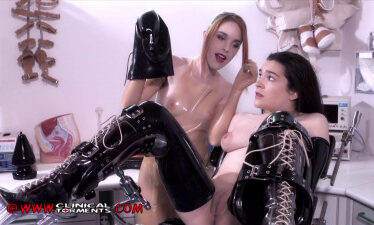