GiGi was just relaxing on her couch when the Catburglar sprang on her and her to stand and strip down. After her slowly taking her top then her skirt off GiGi was to turn around and cross her wrists behind her back. Embarrassed about her situation she tries to cover herself up a bit but only succeeds in accentuating her lovely curves. Serene comes in after she crosses her wrists and gives her a bit of personal appraisal before going straight into putting her into tight bondage. Starting with her wrist ropes Serene binds them tightly before moving down to her high heeled ankles and binding them tightly together poor GiGi to wobble on her high heels. Next Serene stuffs GiGi’s mouth with a white cloth and takes microfoam wrapping it tightly around her head to seal the gag in. Next for a bit of fun Serene crotch ropes GiGi and increases her humiliation by taking her breasts out of her bra. That being done Serene binds her elbows tightly behind her back. Finishing with that she grabs her nipples and pinches them hard before guiding her down to the floor. Serene then takes a long rope and frogties GiGi’s legs down to each other her to remain laying down. She then ties her wrists off to her ankles and hogties her proper before leaving her to struggle and moan on the floor. Serene comes back in with her camera to make sure she gets some nice shots of GiGi bound and gagged as blackmail so she can get away with things without GiGi getting any weird ideas about going to the cops. After the impromptu photo shoot she leaves poor GiGi bound and gagged and struggling and moaning through her gag. 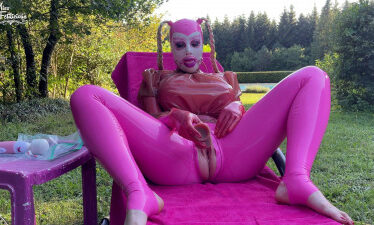