His three German guests are tied to the

Three sexy German tourists kneel in the lair with their hands tied behind their backs, their ankles tightly bound and their necks tethered to a long steel pipe. All three girls are arguing both in German and English, blaming each other for getting themselves in this predicament. They were all at a club last night wearing their skin tight shiny vinyl dresses and stiletto heels, consuming copious amounts of adult beverages when they took up an offer to attend an afterparty. They woke up the next morning still in their skin tight club dresses. The three girls fight and push at each other instead of trying to free each other when the girl in the middle, Muriel is pushed over onto the floor. She struggles helplessly lying on her side as Afsana and Nova continue to agrue. Then the Hunter comes in and welcomes them to his lair, the three girls begs him to let them go but he tells them that they need to be punished first. He grabs three ball gags and stuffs them into each girl’s mouth starting with Afsana. He pulls Muriel back up onto her knees then ballgags her as well. He then pulls the slack out of the rope leashes and ties their neck down to the rail. He grabs a leather paddle and begins to spank their asses with the paddle. The girls wriggle their asses trying to avoid the paddle but tied down the the rail they can’t move enough to avoid the blows. The Hunter laughs as they wriggle their asses with each blow of the paddle playing their shiny ass like a musical instrument. He finishes the first round and tells them he will be back with other impliments to spank their vunerable asses. 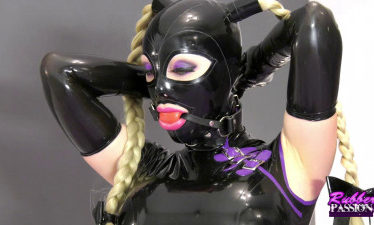 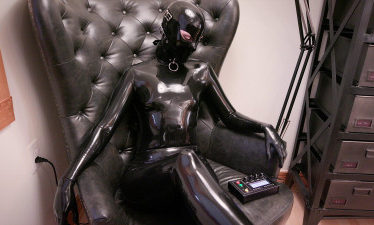