It is always a pleasure to see the ladies tied up and gagged and hope you think so too. Jet was quickly and tightly roped sitting on the edge of the bed in jeans and tee shirt and she was gagged with a very tight red sponge gag. More rope to bind her and her gag changed for a black rubber ball gag which was very quickly taped over with several long bit of tape sealing off her mouth very effectively. Now laying on the bed rope from her neck to her knees and from her ankles to her wrists were added and a long scarf tied over her already well gagged mouth, just for good measure. Mallory was tied onto the table on which she was sitting with her arms stretched out to hooks in the wall and her legs together. She was then then gagged with a leather head harness ball gag, which always look good, which ended up being tied off overhead to stop her moving her head too much. The beautiful tattooed Siren in very skimpy lingerie had her arms tied behind her, her ankles tied together and with a tight crotch rope and a rubber gag. Still wearing her glasses she had a long scarf tied over her gagged mouth and around her head leaving just her glasses showing. Pads were then placed over her eyes and behind her glasses which kept them in place and then another scarf over this to effectively blindfold her. 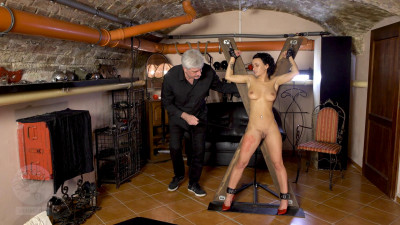