Nikki had her shower, so it was no longer inevitable: she had to go outside! My assistant did a good job filming and photographing her preparations, even though there was not sufficient light. I like these kind of home shoots!
Nikki somehow was a chastity pro right from the start: she even used lotion to take care of her skin, making sure she got right in between the belt and bra (as well as she could). She tried the locks too, funny how the girls always go for the little padlocks, which does not make any sense (in case of the belt), because the little padlock only holds the secondary shield in place. Even if she would be able to break that, the belt would still be locked on with the cylinder lock block on her waist. Fortunately, Nikki couldn’t find a way to break anything at all, so she was going to have to face her Challenge, because the Deal was she would be stuck in the belt and bra until she made a public appearance. 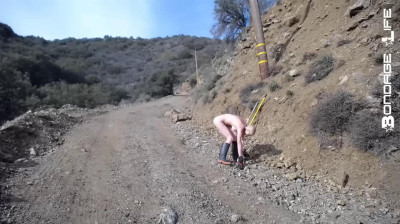