She is struggling to remain free but the way the rope around her neck connects to the pulley, there is no way Penny Barber can resist the forces pulling her into her new box. She hates feeling claustrophobic. Between the cage and the hood she knows this is going to be terrifying. She has tears running down her face before she is even locked in. It wouldn’t be so bad if she could manipulate the bondage herself but the way her hands are wrapped up she can’t get a grip that would allow her any kind of relief.
The key is to make being outside of the box much more frightening than being inside. To do this OT employs some serious corporal punishment. Chains keep her bound between two posts while he works his whip across her ass and the backs of her thighs. Flipping it between her legs he lands several sharp blows right across her clit and pussy lips.
Even the orgasms are meant to be painful. The pogo between her legs doesn’t let her relax at all. As the vibrator makes her weak in the knees and her body begins to slide down the shaft she feels the pressure pushing it further inside of her. There is a bruise forming on her leg from the paddling she is enduring, all the while trying to focus on the feeling between her legs. She wants to cum. The longer she fights it the harder it will be to stay on her feet.
How many times can she cum in one day? How much pain can she endure between orgasms? Every time OT rebinds her Penny knows something worse is coming. Every position has its own trials and vulnerabilities. Each one leaves her open to assault from another angle. The punishments, vibrators, and orgasms all get more intense with each new bind. 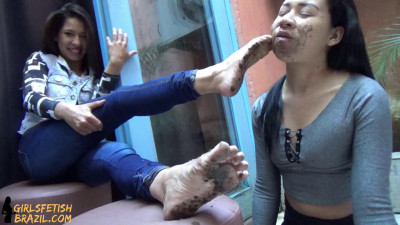