Torturers Apprentice Must Atone for Her Insubordination (2020)

If you remember from when the 1st episode ended, Raven allowed the allure of Ariel’s feet to distract her from her job and today she must atone for her infractions. I lead Raen in with her wrists bound behind her back. I roughly manhandle her for a while. I roughly grope and smack her tits with a hand oer her mouth or a handfull of her hair. I turn her howeer I please by using her tit as a handle. Raven yelps and breathes heavy as I smack her ass. She is soon harness gagged and her wrist rope is tied up oer her shoulders to keep her hands out of the way. I tie her harness gag overhead as I sit on the sofa and watch her turn for me. I watch amused as Ariel, chained and gagged in the corner, looks on wide-eyed and worried. Raven’s ass is slapped and spanked for a while longer before I untie her and make her strip. I leave her in her pantyhose and boots, before tying her in a chair in front of a sturdy post. Her arms are bound behind her and around the post. The rest of the clip is of Raven being tied securely to the chair.
I continue binding Raven before removing er harness gag. Tears form after a few face slaps… She is starting to regret her earlier selfish decisions. She is gagged with a roll of vetwrap and a lot of black tape, before I continue binding her to the chair and post. I eventually remove the cruel gag and tie her hair back and up to the post. I utilize a dental mouth spreader(don’t know what they are called) before nose hooking Raven.
Raven’s elbows are pushed together and tied stringently around the post. Her forearms are also tied, before her hands are taped together and to the post. To keep her quiet, I clamp her tongue before tying the clamp off. I think Raven will think about her actions next time she is told to do something. I forgot nipple clamps… Yes her nipples are clover clamped. The clamps are then pulled tight and tied off as well. Raven endures this cruel, escape proof, and stringent bondage for the rest of the clip, while Ariel watches on gagged and chained to the wall.
I thought making Ariel and Raven worship each others feet would be a punishment, but I was obviously wrong. They both seem to have a voracious appetite for feet. This is not what I had in mind so I finally end the little foot orgy that they have going on and take them both back to their cages. I also added some behind the scenes footage of Raven after she was freed from her chair bondage. 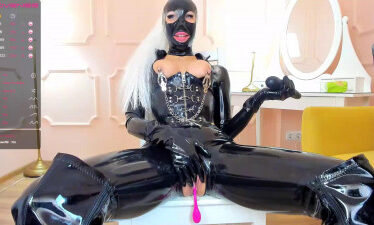